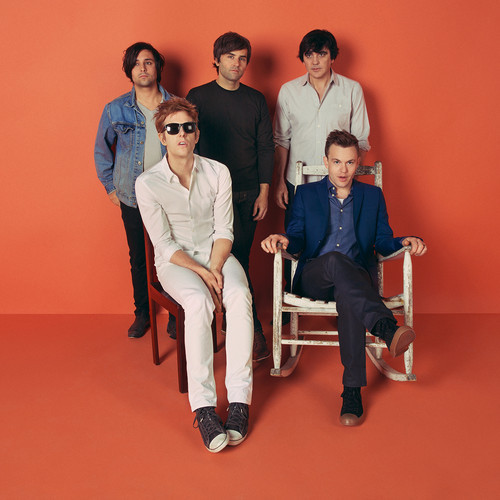 Ah, the start of the fall season. It’s that magical period of time when the leaves erupt from their traditional greens into bursts of mottled reds and golds, the apples burst forth in full fruit from their orchards, and tourists suddenly receive the instinctive call to migrate north and sample the latest seasonal Starbucks pumpkin latte. Brings a tear to the eye really.

But for local Ithaca NY residents and music fans in the area surrounding, it means another jam-packed fall roster of Dan Smalls Presents-curated concerts taking center stage in 2014. And luckily enough for yours truly, I managed to score superb seats this past week for the inaugural show at Ithaca’s State Theatre with Austin TX’s own indie rockers Spoon. They’ve been hot off the early August release of album “They Want My Soul” (their first since 2010’s “Transference”), and my anticipation for one hell of a live set was fairly high. Little did I know what was to come….

Though first up was a special treat in the form of Spoon’s own Eric Harvey acting as the opener for the night. While Harvey has opened for the band before, it was apparently a rarity for him to actually appear with a full group of musicians at his back. Gathered from local contacts around the area (who aided in the recording Harvey did in Ithaca for his 2012 solo record “Lake Disappointment”), the added composition of cello, bass, electric guitar, drums, and backing vocals provided added pastels of flavor to the plaintive heart of Harvey’s guitar-plucked singer-songwriter persona. In fact it led to an on-stage versatility I haven’t had the pleasure of seeing many bands do in which the varied players kept cycling on and off in the background.

At one moment Harvey would be alone on stage, then the next two songs would offer entirely separate arrangements until one guy with a voice and a tune on his strings would become a band in full throat…. only to shift right back again. The night would take a much different tempo before it was complete, but Harvey’s easy swing of mostly originals (diverging only on a loving take of Jackson Browne’s “These Days”) provided a heavily folk-inflected coffeehouse swoon that was a welcoming warmth to settle in with. And given Eric Harvey’s extensive ties to Upstate NY, his set seemed like an appropriately brilliant homecoming.

But then it was time for Spoon to hit the stage, and amidst a backdrop of glowing grey screens and a futuristic disco ball of sorts the quintet shake rattled and rolled the State Theatre right down to the screws of it’s foundations. Opening with the title cut off of “They Want My Soul” before shifting into “Rent I Pay” and older tracks “Don’t You Evah”, “Small Stakes”, and “Who Makes Your Money”, the band kept up a rhythmic barrage that barely paused for either breath or banter. Lead man Britt Daniel was a gritty, growling force of Telecaster-contorting energy who could only be matched by the multi-instrumental tornado that was Alex Fishel, though as a whole Spoon was seamless no matter what direction they chose to weave through their catalogue.

I mean one of the greatest pluses of the band’s new album is how reinvigorated they sound as a group following a four year period of downtime, and that easily carries over into their performance and just how connected these five guys seem. Through a set of 20+ songs they made nearly two hours feel like ten minutes, they got a theatre seated crowd to stand, dance and move from beginning to end, and they converted me from a casual fan into one who’ll be regularly inserting Spoon songs into my playlists for a long time to come.

I don’t think I could have thought of a better way to kick off musical festivities in Ithaca, and you can put THAT into your latte fall fans.