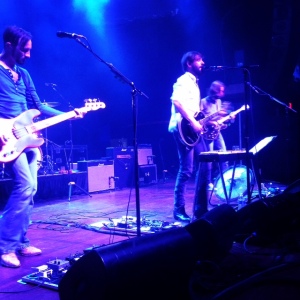 It’s quite a rare circumstance when a band or solo act with some musical clout decides to revisit Western NY within the same calendar year. Younger groups trying to make a name for themselves or beloved jam bands often return on different coast-to-coast legs given their aggressive touring schedules, but it’s always a pleasant surprise to see established acts of differing genres drop by for a second showing.

Enter South Carolina’s own alt-rocker outfit Band of Horses, who’s limited run of haunting acoustic shows took them through Ithaca’s State Theatre (along with opener Sera Cahoone) back in February. This time the Horses (paired up with the band Midlake) brought their full electric setup to a sold-out crowd in Buffalo’s Town Ballroom this week, and the results as they so often say, did not disappoint.

While the Town Ballroom isn’t exactly a marquee venue dripping with the backstory of the aforementioned State Theatre or Buffalo’s own Shea’s for example, it’s a fine hole in the wall that pairs off compatibly with the smaller intimacy of The Tralf (another music spot located just down the street). And while I wouldn’t exactly call the packaged sardine feel of the standing room only crowd “intimate”, everyone behaved themselves for the most part and allowed the best aspect of these smaller settings to truly shine through. Namely, an unadulterated connection to the music on stage. 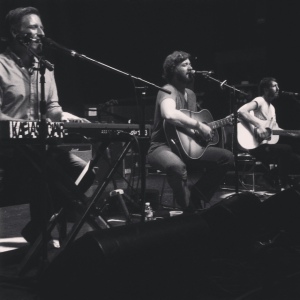 And that kicked off with Midlake, who’s normally more electric-oriented lineup was stripped down in favor of a trio made up of acoustic guitars and a keyboard (with occasional flute for added effect). It gave the band a feel that was a very fitting homage to what BOH was doing back when I saw them in February, complete with several-part harmonies, a melancholic folk-rock sound, and an overall sense of mellow laid-back ease. I’ll admit I wasn’t overly familiar with any of their prior catalogue up to that point, but their warm blend and winsome take on set-closing cover “I Shall Be Released” made for stirring up the steaming kettle of my curiosity. And if nothing else, that’s what every good opener should be able to accomplish.

But then it was time for Band of Horses to hit the stage, also known as that moment where everything the opening band just did during it’s set pretty much melts away entirely until the next day. In it’s place was a foggy haze of excitement for the name on the front of the ticket, and BOH delivering on the anticipation by fiercely ripping into songs like “Cigarettes Wedding Bands”, “The Great Salt Lake”, “Laredo” and “The Funeral”. As with their February acoustic show the night was career-spanning for the group, though in similar fashion they mostly continue to dodge the weight from 2012’s lead balloon release “Mirage Rock”. It’s a move made for the better as it allows the quintet to lead with their best and most creative material, made all the more sharp by going for the traditional rock instrumentation that the Horses are best known for. Aside from moments like the stirring stripped-down sing-along of “No One’s Gonna Love You” and the Buddy Holly-esque walkdown of “St Augustine” their set was loud, relentless, and barely took a moment for a breath (or banter for that matter).

While it’s difficult to say exactly where Band of Horses is going in terms of their studio output these days, they remain a touring band on top that takes the best from both their acoustic and electric sides (I still can’t pick my favorite). While their harmonies are more soaring and crystalline in the space the quiet provides, songs like “Ode To LRC” and “Is There a Ghost” hit with the passion that they’re meant to when smashed down beneath the heel of tall amps and loud pedalboards. The chemistry between the bunch is immediately evident no matter the arrangement though, and the fire they brought to Town Ballroom this week left the whole room steaming (though to be fair that might be more of an air conditioning issue). Either way, go out and see them on tour with Midlake while you can. You certainly won’t be left regretting the decision.