Mood music. Think about that phrase for a moment, and go to the band or artist in your mind that it first takes you to. Harder to pin down than you’d think right?

Or, I could ask you that phrase on the spot today and that first feeling could change by tonight, tomorrow, or the middle of the next week. Hell, it could change in the next minute for all I know.

Mood music is that thing within us all that is always changing it’s shape and bending to the nature of our will’s whim like silly putty, or that certain way trees have of dancing in the wind. Rarely is it a constant, and the deeper you go into music the less you would ever really want it to be.

At least that’s what I’ve found in my experiences anyway.

But if you were to ask me to think “mood music” right in this moment, in this very second as I write to you amidst one of the nicest, sunniest days of this early glimpse into summer, I would have to settle on the equally warm joyousness of soul found deep within the band Pinkwing’s latest EP Honey & Salt. 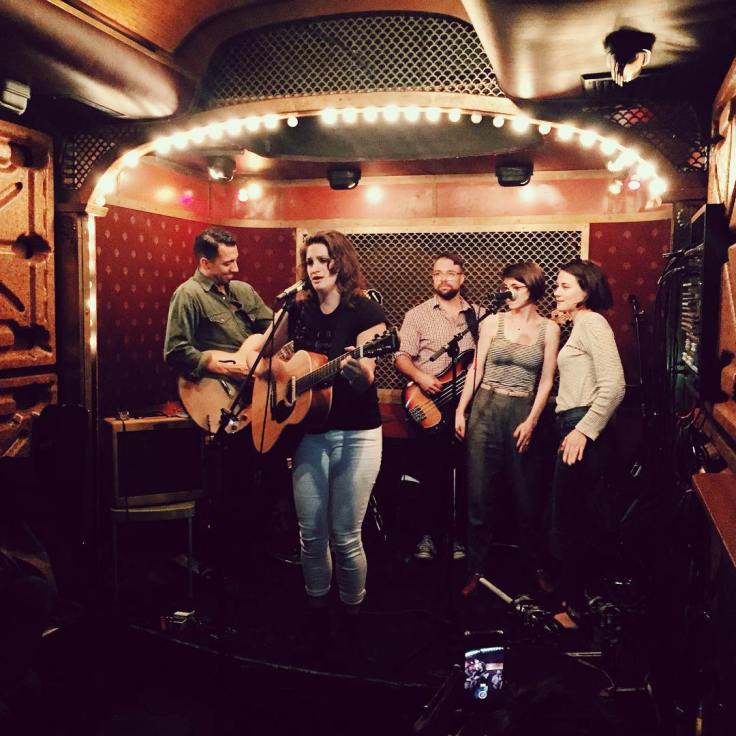 From quite literally the first introductory breath, frontwoman Joanna Levine and company start the record on an uplift with the infectiously catchy, almost folk-like tale of “The Reverend Robert Pawlings”. Based on Levine’s real life husband and bandmate of the same name (which you can learn more about here), “Pawlings” is a sweetly horn-accented, tongue in cheek love letter of a song that climaxes within an audience of voices singing spaciously in unison.

As far as initial greetings go, “Pawlings” is the toe-tapping, ear-worming, sing-a-long, hook of an engraved invitation that’s ready to take you on a ride through the rest of the EP.

Not to be outdone, the next track “Enough” takes down the tempo and has it reside within a swinging, bluesy roadhouse waltz that acts as the perfect vehicle for Levine’s versatilely murmuring vocals. And while “Pawlings” is engaging due to the strength of it’s energy, “Enough” has such an enrapturing cadence to it that it’s nearly impossible not to be drawn into the song’s gradually unfurling, introspective trance and swirling slide guitar solo.

These first two songs make an excellent example of the template for the rest of Honey & Salt for the most part, as it’s an EP that’s sown together with sections that are folky, alt-pop/rock hinting, blues-heavy, contemplatively evocative, and with plenty of grittiness just starting to surface.

That undertow of something sharper and more lo-fi leaning comes out the strongest in “Prettiest Pictures”, which has plenty of sharp electric guitar lines and an angst-filled yearning that hits with the strength of a lonely walk on an uneven sidewalk at 2 AM. Or in the way that initial stream of water hits you from the shower head after a hard day just trying to scratch a little closer to the world you dream of for yourself.

In my interview with Levine she had spoken of wanting to take Pinkwing in a direction that was less cleanly folk-oriented and more battered-up blues, and I for one would be eager to listen to the band diving into those rockier edges. Because even with as pretty as songs like closer “All Night” or “Enough” are in their polished state, I sense even more possible depth for this band the more they might choose to explore that worn-thin vulnerability.

Though when it comes to the magnetic quality of Levine’s vocalisms, I could just as easily see her thriving in a stripped down to the acoustic bare bones setting (a la Bruce Springsteen’s Nebraska) in the case of some of these tracks.

But regardless, Honey & Salt is the perfect epitome of today’s mood music. So sit back, get yourself a glass of something ice cold, enjoy the sun, and pair some Pinkwing right along with it.

There are few better ways I can think of to bring in the season properly.