I always find April to be an interesting time in life and in the world as I know it.

On one hand I think of it like that because it is the month of my birth (originally supposed to be in May, don’t ask), but also because April is such a time of travel and transition. The temperatures creep up higher, the last of those stubbornly sticking snow piles disappear, and it finally starts to make sense to leave home in order to pursue a view from other windows.

So as I take my own advice and look out upon a window scene that is not my own, I share with you the words of someone else who is doing much the same. As you may remember, OTBEOTB spoke with musician Stephen Babcock back in March about his album Said & Done. As is often the case, we did a review on the album as well as an email interview with Stephen who was kind enough to answer some questions and add some…. illumination to the man behind the music.

Luckily, Stephen recently reached out to us again and we wound up chatting about touring life, the reception to Said & Done, and a bit of what the world of a traveling musician is all about. 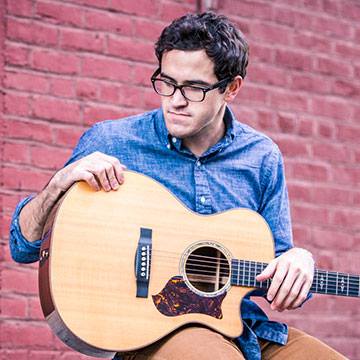 1. Hey Stephen, good to catch up with you again. How has touring life been treating you since we last spoke around the release of your album “Said & Done”? And how have the audiences enjoyed it as you’ve toured it out?

(SB): So far things have been really great! The release show was amazing and really blew me away with how people responded to the songs. The shows lately have been really fun as people start to learn the songs and the words. I see people singing the lyrics at shows now, which is super surreal. It means a lot to me to see that. The songs mattered enough to someone that they learned the words and feel invested in the lyrics. That’s pretty darn cool.

2. Are some areas you’ve toured to more or less receptive to the music, or do you find that the places you tour to are pretty much all greeting you warmly?

(SB): So far its been pretty warm everywhere, but I’ll be honest, my music always feels right when I am in the south. Since the subject matter is mostly about being in the Southern US, I think people really grab onto that when I am playing down there. Still, the songs are really all about heartbreak in one way or another, and that resonates with folks no matter where they are from.

3. What’s life on the road like, depending on whether you’ve touring solo or with other bands? As a music writer who has always aspired to see the touring life, give us a mental taste of what some of that day to day is like.

(SB): Honestly I’ve only ever toured as a solo artist. I have done tours with friends, who are also solo artists, but I have also done a tour with just me and that’s it. I like being out on the road with friends though a lot more as you get to share that road experience with someone each day. As far as a tour day to day, it’s pretty straight forward. Basically I just get up each day, grab some coffee, and hop in the car and drive to venue. Once I am there I basically drop my stuff and wander the town a bit. I always like to get a feel for where I am playing. Even if I have been there before, it always is nice to see what is new and what stayed the same. After that I usually hit the venue and get warmed up and then I get to playing. After the show I try and meet as many people as I can and talk a little bit before packing up and getting ready for the next night’s show.

4. Now regarding your album “Said & Done”, have you largely toured it solo acoustic or have you had a backing band to bring more of that instrumentation on the record to life?

(SB): It’s been a little of both. When I am in New York I basically always play with a band. It’s my favorite thing to do and I think it really brings the songs to life the way I always imagined them. When I tour outside of New York though, it has been fully acoustic. The great thing about that is I think it allows me to give the songs a more personal spin. It’s just me up there with these songs of mine, and I think it allows me to be more spontaneous on the road. A lot of people I meet while touring have never seen me before either, so I think the acoustic experience is a great way to start that connection off. It allows people to see my music in it’s rawest form.

5. And regardless of whether you’ve done it solo or in band mode, have you found the arrangements of the songs on that album to be changing at all? I know a lot of bands talk about taking new songs on the road and finding them change in some ways over time. Have there been any twists or curveballs in your sets like that?

(SB): That has happened a bit. I know with the band, we tend to draw out instrumental moments more and make the vibe more fun and bouncy. I love it when a solo just like takes off and brings the song to a whole new place from where it started. On the other hand, when I play acoustically I tend to take more vocal chances that I might not with the band. I will change how I sing certain things and occasionally I’ll even add a new verse or outro to just see how it comes off.

6. Now I know one of your latest touring cycles has been shared with Darryl Rahn who I’ve heard a little bit about. What has it been like touring with him, and in general what’s it like on the road with another band? Is that sort of a bonding experience, and does it become like a band of brothers over time?

(SB): It has honestly been fantastic. Darryl is a great guy and just all around amazing songwriter. I think touring with friends is definitely a great experience. I think it is great to have people around to share that experience of the being on the road. A lot of things can happen while you’re out traveling around, so it is great to have a good friend to share a laugh or two with while you are playing.

7. Have you found yourself writing any new songs or getting new ideas while you’re on the road? Do you find the road to be an inspirational place to write, or do you save that side of your creativity for when you’re in your element at home?

(SB): For me the road is a catalyst to pull things out of me. I never really write while I am on the road, but touring allows me to think about things in my personal life. When I tour, I kind of escape my day to day life. It allows me to think on recent heartbreak or whatever may have happened in my life. I know lately when I have been on the road, it has made me think a lot about certain people I wish were still in my life and are not any more. So by hitting the road, it allows for a certain sense of clarity I can’t always get just sitting at home. I think there will be some definite heartbreakers coming out of me sometime soon haha.

8. And finally, now for those who might be reading this and are curious, where can we catch you out on the road next? And who will you be with?

(SB): Well I hit the road with Darryl Rahn April 27th, 28th, and 29th. We will be at Gypsy Sallys in DC on the 27th, Café Caturra in Midlothian, VA on the 28th and 7 Locks Brewing on the 29th. Then in June I will be out on Cape Cod for a weekend run of shows and then another southern tour in July. And I will also be playing here and there in New York. I’ll be on my own when out touring, but I’ll be back to give everyone their full band fix in New York. Basically, I am all over this summer hahaha, but I hope that anyone who is curious swings by and checks out a show or two.

Big thanks goes out to Stephen Babcock for catching up with us! As he said in the interview you can catch him with Darryl Rahn tonight in DC (along with plenty of dates still to come).

Also be sure to check out his album Said & Done which is currently available on a variety of platforms. Go check it out and give Stephen’s music some much-deserved love!