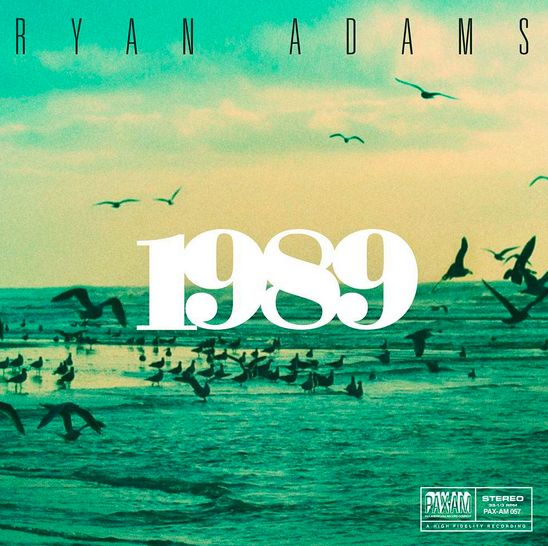 As you know by now (you’re a living, breathing life form using the internet today; trust me, you know) Ryan Adams has covered Taylor Swift’s genre-transitioning hit pop album 1989 in it’s entirety. And it feels like the world has been obsessed ever since.

The record hit the digital shelves at 11 PM on iTunes last night (though it leaked out earlier thanks to those in Australia’s time zone), and it seems like it’s ignited a firestorm in the not-even-24 hours-since. Facebook/Twitter posts, fan opinions, articles, blog posts (clearly joining the club right now) and everything in between. Adams’ version of 1989 is streaming on Spotify, was #2 on the iTunes chart (it sits at #5 as of this posting), has tie-ins with Apple Music/Shazam, and at this point I’m just waiting for someone to discuss it on television to make the cycle complete. It’s become almost exhausting if you actually try to pay attention to all three rings of the mini-media circus surrounding this album’s release.

Thankfully, by almost the end of Day 1 I’ve learned to stop trying to do that and to just keep listening to the record instead. And at least in my opinion, that’s the most rewarding thing you could do here.

As a major fan of Adams since I was 15, I’ve experienced as much my share of feast (29, Cold Roses, Heartbreaker) as famine (Easy Tiger, Cardinology, Ryan Adams). His catalogue is an expansive one spanning multiple bands, genres and attitudes that have never ceased to amaze. “Amaze” being a word that’s a two way street between the positive and negative that’s bounced from one to the other over the years faster than the pinballs Ryan seems to idolize so much.

But that aside, Adams’ perspective on 1989 continues his astounding track record of being able to cover almost any song and fill it with his trademark spirit of brutalized angst, reflective warmth and stellar versatility. The words may be Swift’s, but every melody screams Adams. Whether it’s a Springsteen-esque slow burn on “Shake It Off”, an 80’s refrigerator glow of The Smiths on “Welcome to New York” and “Wildest Dreams”, or the buildup of hook-y goodness on “Out of the Woods” and “I Wish You Would”, these reinterpretations instead strike at the heart as collaborative originals. And that in and of itself feels rather unique between two contemporary artists in a musical landscape that’s already seen so much in this day and age.

Admittedly, the production could be better in spots. The louder songs have a tendency to get a bit muddy and a lyrical moment or two might suffer for that, but it’s a fair trade-off for a creation that barely spent three weeks under the knife from start to finish. And coming from an artist who created the bulky metal and punk-inflected noiseyards Orion and 1984 (no relation), this really shouldn’t garner too many complaints on the ears.

In fact the most complaints I tend to see are why Ryan Adams is even doing this in the first place. And as a legitimate question…. I understand that. And Adams has started to answer it in interviews that started circulating today (which are quite interesting; check them out if you have a chance). But when people like Adams’ own fans use it as an excuse to demean Taylor Swift as an artist or say that she’s “lesser” than him is where I have a problem.

Taylor Swift may not be your cup of tea. Neither version of 1989 may appeal to you. And that’s fine and perfectly normal in the subjective world we live in. But to ignore or simply dismiss Swift’s legitimacy as a pop singer and an artistic contributor to the mainstream is fatally flawed and downright inaccurate in my opinion.

Swift’s 1989  has sold over five million copies, charted five singles, and has continued her trend of shattering records in the music industry. Say what you will about her, but she’s a singer-songwriter who plays her own instrument, writes her own work (without 25 others in tow), and much like Adams constructs words and melody from the guitar on up.

And 1989 is a goddamn catchy slice of pop. Ryan’s interpretation is just a better chance to hear the hooks, heart and melody that was there all along (with his own spin just deepening the well it comes from). And while I don’t see myself becoming an overnight mega fan of hers as a result of this, I (much like Adams) can respect the strengths of her album. Especially mixed together with his musicality, which takes an entire RECORD of experiences…. and makes them into a whole group of new ones.

It makes me further appreciate the fact that I could come into this album with minimal listening to the original behind it. Leave your pre-conceived expectations (and your snobby hipster pretension) sitting at the door.

This one may just surprise you.