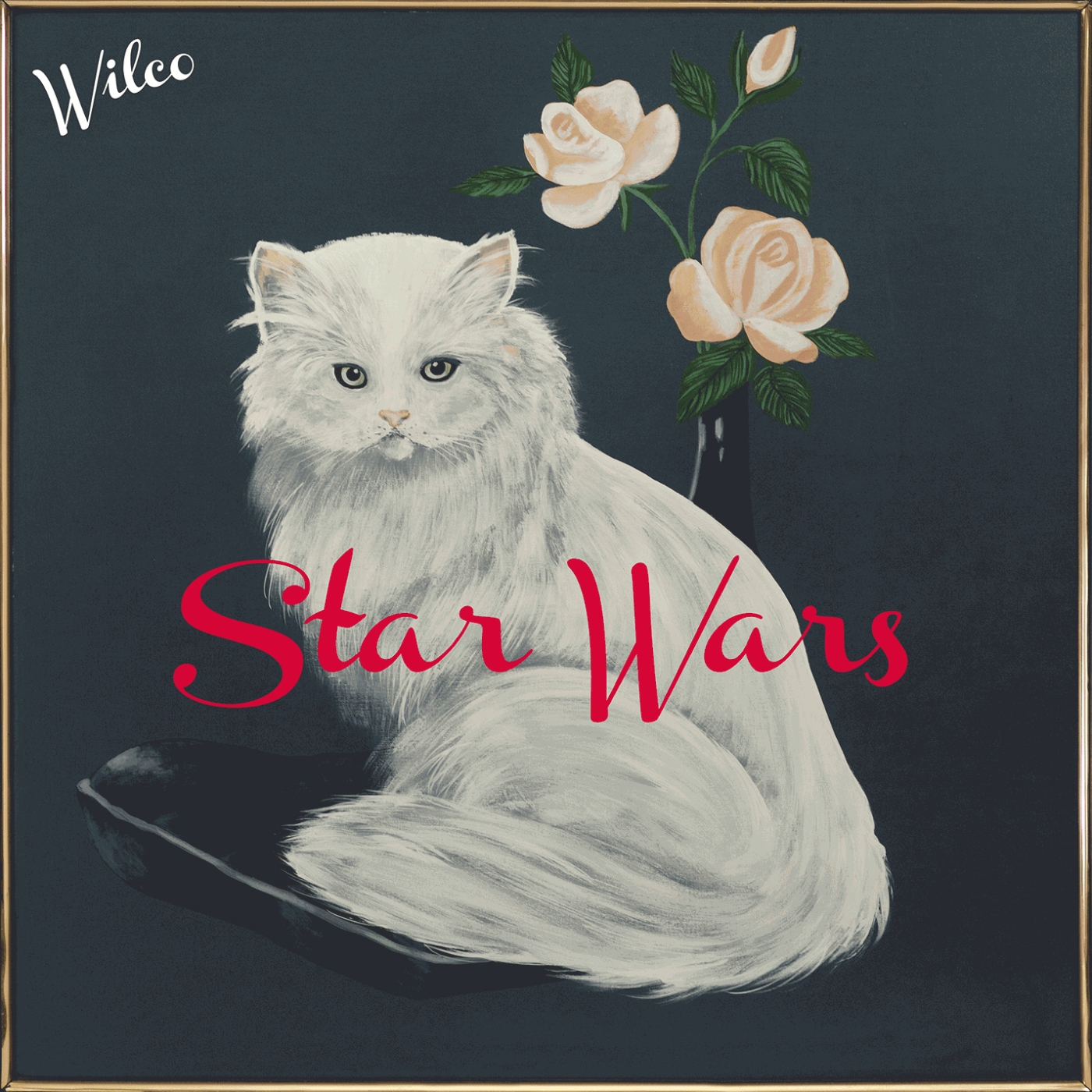 As I sit here in these post-June 16th/pre-June 17th hours, I originally thought to myself that I’d be writing something in my blog about the new Jason Isbell record. After all, Something More Than Free does officially roll out tomorrow at long last, has carried a great deal of anticipation along with it, and quite frankly in my book holds up to all that baited breath.

But before I could get into a feature about that, a little band from Chicago had different plans for music fans inhabiting the interwebs tonight. I was no more than able to crack open the lid on my computer screen before I was greeted by the sight of Wilco dropping their 9th studio album Star Wars as a completely free download (provided by entering your email address on their web site). No strings, no catch, just an email address for 11 unknown studio tracks and some mildly perplexing cat art (mild for the internet anyway).

Was it an album of instrumentals? An oddly conceived joke of some sort? More unreleased demos? What was going to be waiting for me and so many other sets of ears in this rather sudden (and Beyonce-esque) turn of events?

Once I was able to get my confusion as well as my jaw off the floor after pondering all of this, I went into this listening experience with what I now realize was the perfect reaction. Which was…. essentially nothing. A lot of those questions obviously, but for the most part I was the fresh Etch-a-Sketch and Star Wars was about ready to start twisting the knobs.

And while I don’t think listening to this album has left me in a state similar to Luke Skywalker finding out who his daddy is (I had to make one Star Wars joke), this Star Wars HAS left me joyously surprised.

Not that I doubted Wilco or frontman Jeff Tweedy’s prowess. Rather, by the 20 year mark of their career I started to figure that the sextet had settled into the pleasant middle ground carved out by the likes of 2007’s Sky Blue Sky and 2011’s The Whole Love. Far from dull and as hookishly melodic as ever, but in a territory settled away from their more rigorously explorative sides (2001’s Yankee Hotel Foxtrot and 2004’s A Ghost Is Born). Don’t get me wrong those sides have still appeared, but they seemed reserved more for moments and glimpses.

Not so with Star Wars. The frantic fever of opening instrumental “EKG” is less of a glance and more of a full-throated shot to the chest announcing the tapestry of wigged out psychedelics, jittery, muscled electric guitars, layered harmonies and tightly nuanced song structures soon to come. The melody still exists within the nooks and crannies, but it’s less accessible this time around and that’s a very good thing. This record doesn’t want you to be so easily satisfied within melody or lyrics; it wants you to dig down for the layers of sonic gold waiting just beneath the surface.

It’s as close as Wilco has ever gotten to reaching back to Ghost, only Wars feels more like abrupt, in your face alt-rock instead of the droned-out, Television-heavy influence of that period of time. And it’s that solid all-around intensity coupled with superb track sequencing that gives Star Wars the perfect stage for it to be taking tonight.

You see in another, more traditional format this type of album might have struggled to find it’s footing in a market dominated by releasing singles, doing promotion in every medium possible and having listeners hear complete work only in beginning chunks.  Star Wars thrives in my ears solely as a complete piece of music, so now it not only gets to do that before it’s later physical release but ALSO makes mass social media news and promotes itself beautifully before release date.

And it’s not without merit. Casual listeners or those more accustomed to Wilco’s softer side might not be as interested, but for the diehards long-awaiting a return to the band’s balance of accessible versus intriguingly challenging, this by far is as close as they’ve ever gotten. Star Wars is certainly not a groundbreaking masterpiece of revolutionary musical theatre, but it’s not overly long, straight to the point with it’s intentions, and executes them beautifully. It represents the most ambitious chance Wilco has taken musically in years, and as a longtime admirer of the group it quite literally comes as music to my ears.

Listening to tracks like “You Satellite”, “Random Name Generator” or “Magnetized” reminds me why this band helped me love music. It reminds me of why I long considered Jeff Tweedy to be an influence in how I wrote strangely worded poetry.

And most of all, Star Wars leaves me feeling more energized than any new release has in a while. Mostly because the band making it sounds as tight and as sharp as they’ve ever been making a record that sounds like them, yet excavates new territory as well.

Not bad for a Thursday night surprise, eh?

Favorite Tracks: You Satellite, Random Name Generator, Magnetized, Where Do I Begin, Taste The Ceiling