Oh Brooklyn. You’ve killed me with blazing heat, taunted me with snow and have shown me so many frigid nights that I’ve blown more smoke out of my mouth than a Cheech & Chong film. But still, you keep me coming back. Why is this you ask? Well the music for one, and the continued lure that is local band The Lone Bellow. Prospect Park, Lincoln Center, Carnegie Hall… the hits have just kept coming since the folk-rockers first broke on to the scene with their 2013 self-titled debut. And sure some of those have wandered a bit closer to the city than Brooklyn, but for 2015 the trio of Zach Williams, Kanene Pipkin, and Brian Elmquist broke out an exciting two-fold surprise! Firstly, they snapped the curse of the sophomore slump by releasing a superb new album called Then Came The Morning back in January with The National’s Aaron Dessner producing. Then, on the heels of what eventually became an entirely SOLD OUT tour, the much-beloved trio announced that the end of that tour’s first leg would coincide with Brooklyn dates in the Bowery Ballroom as well as the Music Hall of Williamsburg. So as naturally as Batman is called off to fight crime, yours truly responded to the Band-Aid Signal (watch Almost Famous ), found the nearest train and headed due south! Well, it’s more like… going east to go south and there are a LOT of stops, but… that’s not the point. The point is, March 25th and 26th found me front and center to not only see my favorite modern band, but one of the best bands PERIOD.

And while I wanna jump right into the action of those two nights, I have to put the brakes on for a moment and acknowledge both the Bowery and Williamsburg. It was my first time experiencing each, and while both are very similar I can’t think of two venues in recent memory that I’ve had more fun being in. 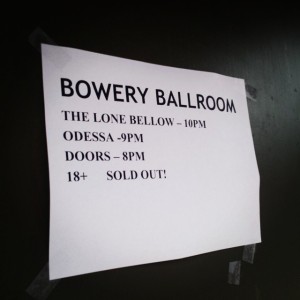 They’re both extremely intimate (thumbs up from me already), barely-balconied and standing room, without a bad angle of the stage from any side. Not that I was focused much on that in my initial rush to hit the front row, but later I observed just how brilliant the perspectives were from spots around each venue. If I had been of a more casual mindset, I could easily see either the Bowery or Williamsburg being a great place to just tune out to a night of laid back music. Their stage lighting… now that’s a bit of a different story. If I could describe it simply, I would take it in stages. Sometimes it actually looked like watching a great folk band with influences of gospel, blues, country and alternative elements being naturally lit. Then suddenly a transformation would take place (same band mind you), only NOW… I felt like Chvrches or Zola Jesus was committing technicolor sabotage due to some kind of folk-hating grudge. Or in the case of Williamsburg, the crowd would suddenly be bathed in a floodlight so bright it felt like a musical version of Cops was about to take place.   My riffing aside though, lets forget about putting on those brakes and get to why you’re all reading this piece: THE MUSIC. The Lone Bellow. At home in Brooklyn. The trio that made your hearts soar and break, live and in person with a backing band expanded to include horn players (for two nights only!) that helped make the sound of this new record so beautifully glorious. Like a match that went up to heaven, and made it just for your ears. And within these churches of music, within those expectations and hopes and ever-mounting anticipation, The Lone Bellow laid down two sermons of such fiery passion to the congregation that I think Satan himself was keeping watch for the hellhound on his trail.

From the first moment on the first night in Bowery Ballroom when Zach rushed to the edge of the stage, mic torn from it’s stand as he sang the very fibers out of the new album’s title track… I knew I was home.  Every bit of sweat from his brow I felt like my own, felt like the crowd’s own as we all bled his spirit back to him. Back to Brian, back to Kanene, back to them all. It’s why Lone Bellow fans are some of the easiest and most wonderful to talk to at shows. They’ve experienced that collective emotion and that healing catharsis that’s so startlingly intense… it’s nearly painful. When you talk to them (much like with the band), it’s like talking to family. And in terms of a familial experience, we got two nights of nothing less than the band leaving themselves out there completely. Zach stood out on the title track and left my hair standing on end with “Marietta”, “Take My Love” and personal favorite “Tree To Grow”, while Brian (with his rebellious curl of hair) owned the stark “Watch Over Us” and the choogling gravel of “Heaven Don’t Call Me Home” (with Zach providing a homemade choir in the midst of the crowd). Never to be left out though, the ever-angelic Kanene both broke and mended my soul with her latest song “Call To War”, and destroyed a cover of “Slip Slidin Away” that left the crowd absolutely breathless. Okay I can’t speak for the crowd, but to see her hold out her hands and fiercely belt those words into a single mic… she destroys that song. Paul Simon should be bowing down to her.

And of course as anyone who’s been to enough Lone Bellow shows will tell you, the band did manage to flex their crazy knack for some unpredictable song medleys. One moment Zach and Brian were bromancing it out with some of Boyz II Men’s “I’ll Make Love To You”, in another Brian was rapping over Blackstreet’s “No Diggity”, and in yet ANOTHER the trio took on some classic 80’s rock with Prince’s “Purple Rain”. That last one may not have gone over too well according to the band, but the audience was absolutely in love with every second! Maybe that whole wedding band thing could work out after all….

So… what shows. What fun. What body weight lost from perspiration. Pretty much the whole, delicious musical sundae right? Not quite. Much like how once Batman starts fighting crime he can’t seem to stop, the Band Aid Signal beckoned once more and brought with it… massive train failure! I don’t exactly think that’s part of the band-aid contract, but it did put a pretty nice cherry on that sundae…

Enter the cherry: The Lone Bellow’s Soundcheck session and WNYC’s Greene Space. I had heard that this session would be taking place shortly after I left the city, but thanks to whatever divine intervention is responsible for train failure, I found myself in a room of 30-40 people along with these wonderful talents.

Sounds pretty good right? Unfortunately (and it’s a minor unfortunately), the whole gathering was only about an hour or so. Still, it was wonderful to hear the band run through four new songs from the record, do a small interview, and take some questions from the crowd. I personally thought the interview segment wasn’t necessary, but as the video below shows I think it went pretty well anyway.

But now I’m back home again, and my review is at an end for this post. Honestly the Lone Bellow material is barely half of my fun Brooklyn music stories, but I think I’ll save the rest of the trip for another post. Until then, I leave you with a picture from Bowery Ballroom. If nothing else I’ve said has convinced you about The Lone Bellow, if my review and my words and my feelings have not done it, read these faces. They’ll tell all the rest of the story that needs to be explained. Oh and Brooklyn? Thanks again. 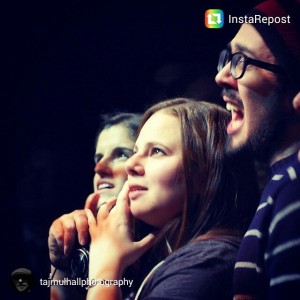 (both videos and all photos but the last courtesy of Mara S., or @watchingforthesigns on Instagram)