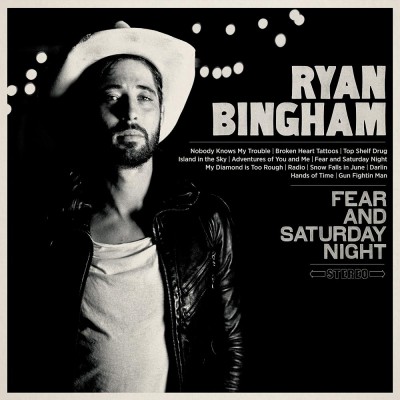 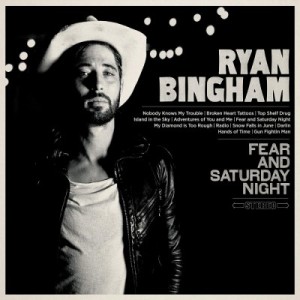 Ryan Bingham has a consistent knack for capturing the essence of the Southwest. New Mexico-born and Texas-bred, the grizzled singer songwriter has always known just how to paint a dusty canvass of border towns, long liquored up nights and the hardest and most scarred roads down the path of rough living. He showed it off to critical acclaim with 2010’s The Weary Kind, but for Bingham that’s a place his whiskey-soaked heart seems to consistently inhabit.

His prior release (2012’s Tomorrowland) did get away from that in order to venture towards a harder, more rocked out edge, which left many fans feeling a bit dubious about where his sound was evolving. Enter January 20th’s launch of Bingham’s 5th studio LP Fear and Saturday Night, which should go a long way towards putting any of those possible uncertainties to rest.

While it’s not exactly Mescalito or Roadhouse Sun redux (which would only be unnecessary retreads), Fear essentially finds Bingham going back to his mix of rootsy, rockin’ country-folk that knows how to blister with a lyric as easily as a guitar riff. It bears a lot of similarities to the best of what his past work was about, yet manages to feel like it’s an expansion upon new ground.

Nobody Knows My Trouble and Broken Heart Tattoos are great introductions to this, because while they feel like classic Ryan Bingham storytelling they also feel…. older and wiser. Now almost 34 instead of where he began in his mid-20’s, Trouble is an autobiographically honest look at making it through the worst of all that hard living, while Tattoos seems to examine and advise a pure heart on some of those more painful emotional arrows still yet to find their mark.

But not everything is quite so melancholic and threadbare on Fear. Radio and Island in the Sky are hook-heavy foot tappers playing havoc all across the highways of a Santa Fe skyline, while Top Shelf Drug and Darlin are two very differently toned love songs. One is brash and strung out on god knows what, while the other has sobered up to reveal a few more tortured insecurities buried beneath the surface.

All in all, Fear and Saturday Night doesn’t attempt to revolutionize anything so much as go further into the depths of prolific perspective and strong songwriting. I don’t think Bingham is going to initially blow anyone away with this exactly, but Fear does get stronger and more ear-catching with every listen. It’s Ryan Bingham at his best with what he does best, and fans as well as new listeners alike couldn’t really ask for much better than that.