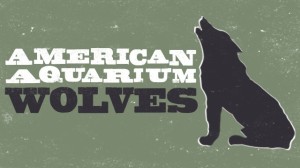 I’ll tell you something, we may only be about a month into 2015 so far, but I’m already noticing just how hard the Southern born artists are throwing down the musical gauntlet this year. This week alone has seen an excellent release from Georgia/Virginia hybrid The Lone Bellow, a recent return to form from Texan Ryan Bingham (that I’ll be talking about soon), as well as an early preview stream of a weathered heart-stopper of a record from Georgia’s Butch Walker.

And if that wasn’t enough, today we have the Wall Street Journal (of all unlikely places) streaming the upcoming February 3rd release from North Carolina’s own American Aquarium. The record (entitled Wolves) is the band’s 8th studio release since 2006, and finds the group in their next chapter following the brilliant resurrection from the ashes of musical frustration that was 2012’s Burn. Flicker. Die. And indeed Wolves really does feel like a succession from one stage of life to the next, even if the band didn’t end up giving in and breaking up as initially planned.

For one thing, while Burn felt like the take no prisoners white hot glow of a band prepared to lay all it’s guns on the table with a snarl instead of a whimper, Wolves feels much more self-assured within it’s own stability. Buoyed by new found life as a band, an overwhelmingly successful fan-funded album project and lead man BJ Barham’s impending marriage/sobriety, that same cynical edge and dusty traveler’s desire remains hard wired into American Aquarium’s DNA. But along with it is a sort of survivalist’s perspective; an acknowledgement of the hard roads and back streets it took to succeed, the dead ends that nearly ruined it all and when all is said and done, the good that made the journey getting here worthwhile.

Barham himself has referred to this album as a “huge departure”, and lyrically it’s easy to see why. Songs like Family Problems and Losing Side of 25 still seek out the familiar anxieties and despair within the shadows of age and addiction, but this time around there are flickers of a silver lining. Those flickers become steady beams on Man I’m Supposed To Be and Who Needs a Song, which have to arguably be two of the most sweetly intended love songs this band has ever created.

The darkness and the drifting still exists within the marrow of the songwriting, but with Wolves the overarching feeling is…. that isn’t all there is anymore. That plunge into bitter darkness, night after night spent with alcohol in seedy bars and the grind of hotel room after hotel room on the road…. life has changed with a certainty towards the better. A reassuring hand, a relationship to build, that knowledge that somehow, imperfect as it may be there is a way out from under even the worst that life has offered.

Frankly, BJ Barham and American Aquarium sound as happy and as uplifted as they’ve ever been. Of course as with most great alt-country bands that dose of happy still comes with a hearty layer of eloquent self-deprecation, but it’s a suit that fits them better than others who faded once the alcohol and amphetamines did.

Either way, Wolves stands as testament to the type of pedal steel-laced, road worn Springsteen-esque storytelling people should refer to when they think of what true country music is. It’s damaged, intelligent, and it draws in the listener with it’s sheer power of passion…. instead of tractors and drunken frat girls. Lookin’ at you over there Kenny Chesney/Florida Georgia Line.